While waiting for forever at the surgery center before getting her tubes in. Jay’s playing in the kid’s playroom. Most of the little ones there are really little, some just babies. Most are still in their footie jammies. She’s one of the few ones. Poor girl has to get tubes again when she’s almost 6.

Due to a miscommunication, we’re there an hour early. She gets very hungry and starts getting grumpy before we finally get to go to the back.

While she waits, she makes a throne out of the red cardboard bricks and declares herself “Queen Jay”.

My phone zooms in, but the photos aren’t as good. looks like I won’t be zooming much! 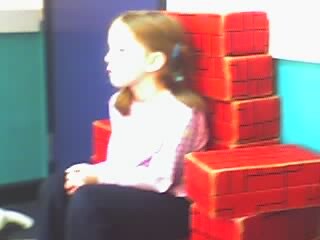