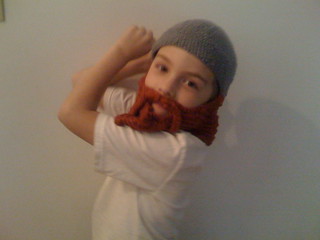 The battle bonnet is now done!

It “only” took four tries, including the ill-fated Dwarven Battle Yamulka, which Jay stole for her stuffed animals.

So, one down and two more to go. Jesse also wants the Blond version and Ben wants one as well.

Next up will be some more subtle wrist warmers to wear at work. The striped ones get me odd looks sometimes and I don’t feel they are suitable to wear to meetings unless I happen to wear my purple sweater.

Jesse was having too much fun posing in it so it was hard to get a good photo.

UPDATED: Once it was blocked, Jesse decided he wanted the nasal bar on this one, so it has a tad bit further to go.