After several attempts at the Dwarven Battle Bonnet for Jesse (which he is now refusing to wear!), I had a spate of startities, followed by frog- and ripitis. It’s gotten to the point where I don’t bother putting a project into Ravelry until I’ve got it done!

Over the weekend, I finished up some new wrist warmers for mom. These are using some acrylic yarn I had lying around. I started them right after Claudia’s husband died because I felt the need to knit something in his memory and an urge to have a project finished. They’ve been languishing by the side of the bed, but I was determined to finish them over the weekend. 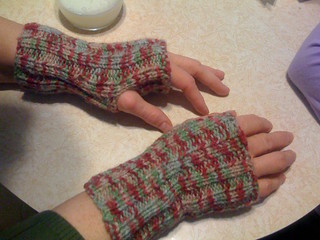 Jay also kindly modeled them, though I was instructed to just take a photo of her hands. 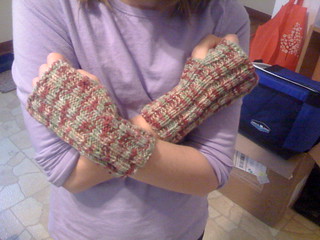 Now I just needed to find a project that used bigger yarn. I finally chose “An Unoriginal Hat” by the Yarn Harlot because it’s a beautiful hat and would let me test out cables before knitting “Fetching”. I’m using a gorgeous Malabrigo Chunky Yarn in a gorgeous Brown and Pink colorway. 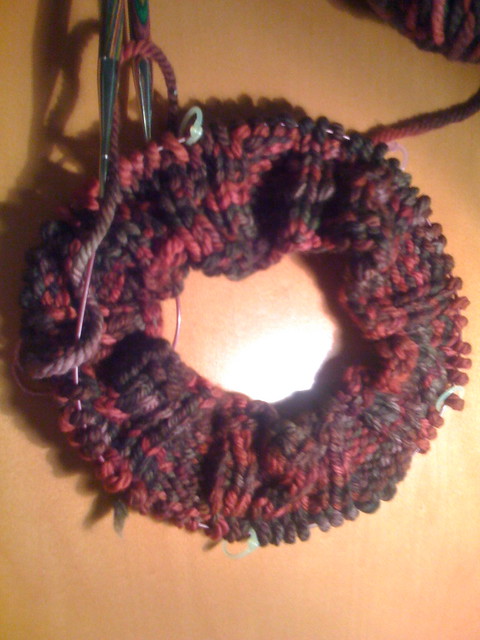 I’m modding this by knitting an extra set of cable repeats around, casting on 70 stitches instead of 56. Using a size 11 needle with the awesome Harmony circulars from Knit Picks.